After a recent rain, I was hoping the waterfall in Rockbridge Nature Preserve was flowing. Nope. It was still a very good morning. 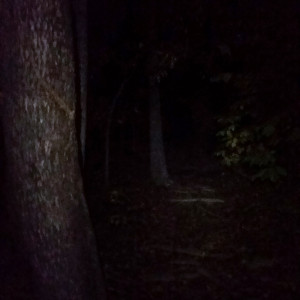 I got to the Preserve parking area before dawn and started hiking to the rock bridge in the semi-darkness. The first part of the trail runs along the fenced border of a cow pasture. When you don’t know she’s there, a black cow suddenly mooing in the dark right next to you can be very startling. I suppose she found me nearly as surprising. On high alert, I made my way up then down the trail to the rock bridge. It wasn’t quite as dark as this picture suggests, but I kept my head lamp on to avoid tripping over one of the approximately 42,000 roots that crisscross the trail.

There wasn’t a drop of water. The creek that feeds the waterfall is long and shallow and was filled with the leaves the rain had knocked out of the trees. This is a nature preserve and there are fences to keep people out of sensitive areas so composition choices are limited. I just couldn’t find one I really liked. The shot below isn’t bad, but it seems cluttered.

The trip to Rock Bridge didn’t turn out like I hoped, but I got an uninterrupted early morning hike in cool air among autumn color so I was happy.

Just up Highway 33 from Rock Bridge is Clear Creek Metro Park. I’ve passed it a few times but never visited. I drove slowly to Romona Lake near the west end of the park. Many of the squirrels crossing the road were so chubby they didn’t dart so much as amble. Romona is a small lake and I thought it might provide a compact autumn reflection scene. On a large lake, a wide angle lens will reduce the trees on the far side to shrubs. Romona didn’t disappoint.

The trail from the parking lot to the east side of the lake is pretty steep. Going down to the lake is easy. going back up is a workout – especially if you happen to be carrying a couple extra pounds of mud on your boots from the super soft lake shore. After stomping around awhile, I found a composition that I kind of liked, but it seemed as cluttered as the rock bridge photo.

My favorite shot of the morning came from the other end of the lake. There’s a parking spot right by the tiny dam at the south end of the lake. A quick 200 foot (60 meter) walk up a short hill and you’re at the lake. There’s even a deck and benches off to one side if you want to sit and read. I’m thinking the spot might be great for a star trails photo. It’s small and from the dam you look north. If you center Polaris then you could get the star trails reflected on the water. I’m going to go back and try when there isn’t a full moon.

I spent three and a half hours wondering and photographing the autumn forests of central Ohio and it went by in the blink of an eye. That’s a very good morning.