Blendon Woods Metro Park opens at 6:30 AM. In mid October in Ohio the sun rises at about 7:30 AM. How can you enjoy photographing fall colors before the dawn? Bring a camera, a tripod and a 2,000,000 candle power flashlight.

If there’s a theme to my fall color photos this year, it’s “glow”. I’ve shot golden leaves during the golden hour, back lit goldenrod, and sunrise over dry amber corn.

After a recent predawn visit to Blendon Woods Metro Park, I got the idea to expand on the glow theme by light painting an autumn tree. Light painting is just selectively illuminating a subject in a photo during a long exposure. Digital Photography School has a good tutorial with more info – Light Painting.

In a corner of the park’s Goldenrod Trail meadow was an ideal tree. It’s leaves have begun to turn, it’s separated from the treeline and it’s close enough to the path to illuminate with a Brinkman MaxMillion II flashlight.

I got to the park right after it opened. You don’t want complete darkness for light painting – you want some light on the background objects so they’re not just black silhouettes. While I waited for the predawn light, I tried something called Expose To The Right (ETTR) to try to capture the Milky Way over the meadow despite the city light pollution. I tried several combinations of ISO and shutter speed, but wasn’t able to see the Milky Way even after extensive post processing. The combination of city lights, the coming dawn, and high humidity were just too much. I did get an interesting photo of a few stars, including Sirius and the stars in Orion’s Belt, over the goldenrod.

After setting up in the corner of the meadow, I took a few test shots to dial in the right ISO and shutter speed. For one of the shots I got out my smart phone to try to record the process, uh, in the dark. It sort of worked. The camera was set to a 2 second delay so I could press the button then get ready to paint the tree with light. After looking at the images on the camera, I opted to give the center of the tree a couple extra passes with the flashlight. It enhances the impression that the light is coming from the tree and radiating outward.

I took photos with and without the light painting because the light spilled on to the foreground and I thought I’d combine the unlit foreground with the lit tree. It turns out that I liked the light that spilled on to the Goldenrod in the foreground. The photo below is a single long exposure adjusted in post. Because it’s a long exposure, there is some blurring where the leaves moved, but that’s almost impossible to avoid. In the finished photo it almost looks like the tree is producing the light. In other words, glowing.

I also tried a landscape composition with the light painted tree on a rule of thirds intersection. The first image below is the Straight Out Of Camera (SOOC) scene without light painting. Below that, you can move the slider back and forth to compare the SOOC light painted shot with the final processed photo. (Note: the recent WordPress update has broken the Before/After function on some mobile devices. I’m trying to find a fix.) 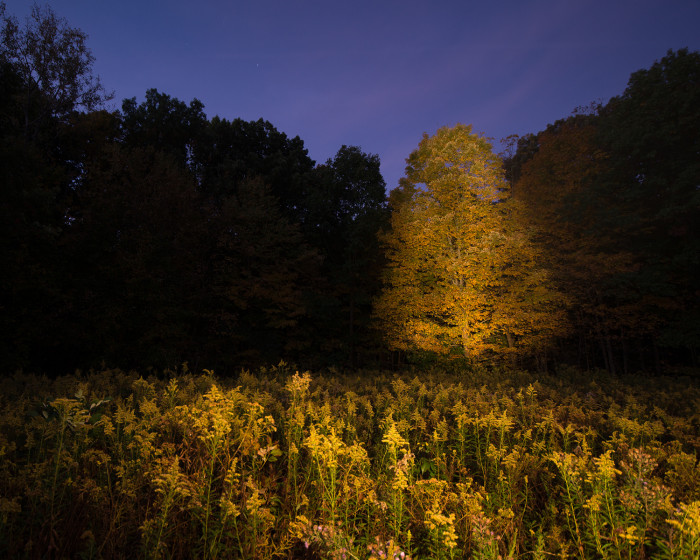 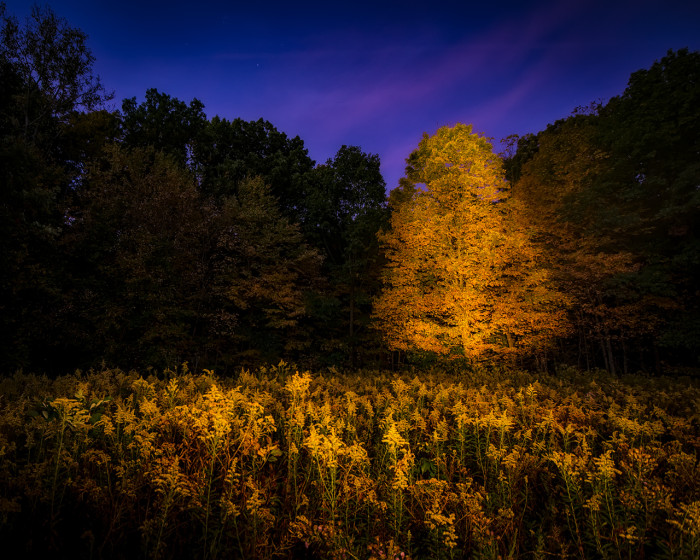