The nights of the new moons are the best for Milky Way photography. What’s a new moon? It’s when the moon is between the Earth and the Sun so the side that faces us is dark. Without the Moon reflecting sunlight in our night sky, it is as dark as it can get and we can see and photograph the stars. Being out around the new moon may also lessen your chances of encountering werewolves. That’s not a guarantee though.

Useless trivia side note: In April, 2022 we will have a “Black Moon” which is a second new moon in the same month. Oooooh.

While we definitely need a moonless or nearly moonless night for Milky Way photography, we also really need the the sun to not be in the sky. So can we start shooting at sunset then? Oh no! For Milky Way photos the vague notion of “dark” will not do. We need “Astro Dark”! What’s Astro Dark? Well the sun is so annoyingly shiny that it has to be far below the horizon (18 degrees below to be nerdy about it) before it stops screwing up our night sky. Astro dark is the time the sky is as dark as it gets and usually begins about 90 minutes after sunset and ends about 90 minutes before sunrise 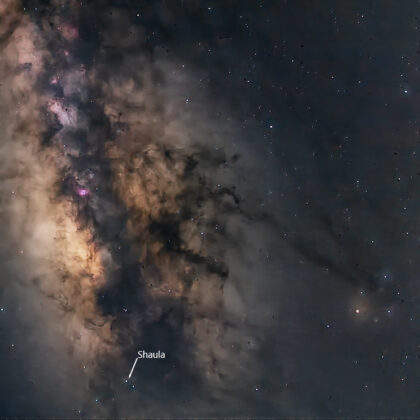 What most people want to capture when they photograph the Milky Way is the colorful, dramatic core of our galaxy.

In the northern hemisphere the core is only visible above the horizon during those astro dark times for about nine months out of the year. But what counts as the “core”? It’s a little subjective, but for the sake of the calendar, I’ve chosen the star Shaula, the last star in the tail of the constellation Scorpius, as the lower boundary of the core. So the Milky Way rise and set times are based on when Shaula crosses the horizon. 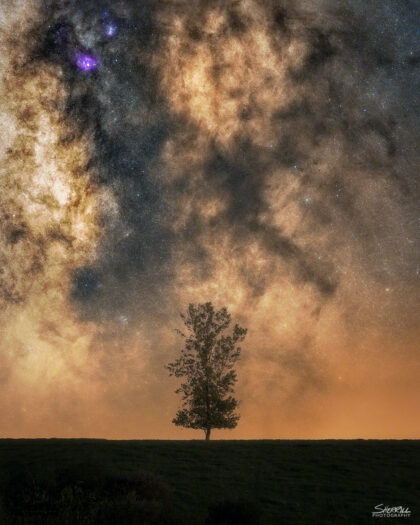 But be aware that because our views of the horizon are seldom perfect, Shaula may be hidden by light glow or trees, hills, or buildings (but probably not werewolves) while you’re taking your photos.Of course these times are approximate and vary with your elevation and location. If you’re on a tall hill with a clear view or on the shore of an ocean or large lake, you’ll be able to see more of the core for longer.

And you can take Milky Way photos before and after Shaula crosses the horizon. Don’t think of these times as cast in stone; they’re only a general guide.

So these three factors, the Moon, astro dark, and Milky Way rise and set times determine when and for how long you can most effectively photograph the Milky Way. The three columns on the left give the date and session start and end times. The remaining columns give you the duration, the rise/start and end/set times for the moon, astro dark, and the core, and indicate which determines the start and end time of the session with either a red or green background.

Click the button below (and choose Save File if an option box appears) to download the calendar as a PDF. Feel free to print the calendar for your own use and share the PDF file with anyone, but don’t be an asshole and try to take credit for it or try to sell it. Happy shooting and clear skies!

If  the pandemic is under control by next spring, I am planning on offering Milky Way Photography Workshops. You can use the contact form below to send me an email if you’re interested in receiving updates about the workshops.

Ohio weather makes scheduling Milky Way sessions far in advance nearly impossible, so the workshops will be in three parts. First will be a daytime session where we will go over gear, technique, and settings. Second, when a clear moonless night is available, we’ll have a meetup of up to six students and practice shooting the Milky Way. Third will be a session in person or over Zoom where you will learn how to process your Milky Way photos in Lightroom and Photoshop.